LOS ANGELES, Feb. 21, 2020 /PRNewswire/ — Live on Kickstarter.com, and being shown for the first time at New York Toy Fair, Anchorman: The Game – Improper Teleprompter is an adult party game from Barry & Jason Games and Entertainment based on Will Ferrell and Adam McKay’s hit comedy, which also stars Steve Carell, Paul Rudd, Christina Applegate, David Koechner, and a host of other comedians. 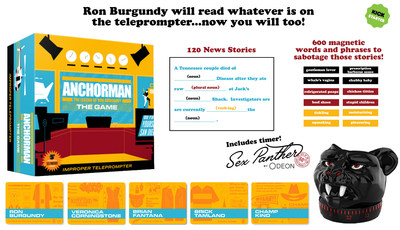 The game is inspired by Ron Burgundy’s susceptibility to read whatever is written on the teleprompter, no matter how strange or inappropriate. Players compete by sabotaging other anchors’ news stories with ridiculous magnetic words and phrases to try and get them to laugh while reading the news.

Players can assume the roles of Ron Burgundy, Veronica Corningstone, Brick Tamland, Brian Fantana, Champ Kind, Frank Vitchard, Wes Mantooth, and even his mother Dorothy Mantooth! The game, which features iconic art from Mattson Creative, includes magnetic score tokens of Baxter the dog, Sex Panther, Lamp, and a glass of scotch. It also includes Whammy cards, which feature bits of story from the movie and randomly award points or mix-up the game play. Players keep time with the one-of-a-kind Sex Panther mechanical timer («60% of the time, it works every time!»).

The Kickstarter campaign for Anchorman: The Game launched with a goal of raising $35,000 for manufacturing, and ends on March 20th.

Barry McLaughlin and Jason Lautenschleger, the toy inventors behind this party game, met on their first day of college 24 years ago, and have been collaborating ever since. After being contestants on 10 game shows between them (Jeopardy! for Jason, and a Showcase Showdown win on The Price is Right for Barry) they decided to host their own game nights, which quickly turned into their first party game Game Night in a Can, sold at Books-a-Million, Urban Outfitters, and independent toy stores. They followed that up with Toy of the Year finalist Dr. Biscuits’ Radical Road Trip, a unique travel game now on shelves at Barnes & Noble.

In addition to Anchorman: The Game – Improper Teleprompter, Barry & Jason will be releasing a travel game Summer 2020 based on Bill & Ted’s Excellent Adventure.

McLaughlin, previously an Advertising Creative (Hot Wheels, Honda, Red Bull) and Lautenschleger, a Television Development Executive (NBC’s Songland), approach all of their games with a focus on entertainment that inspires creativity, laughter, and connection. «Getting to make a party game based on our favorite comedy from this millennium is a dream come true,» said Barry. Jason added, «Our goal is to delight fans of the film while still being a hilarious party game for anyone who has never seen it!»