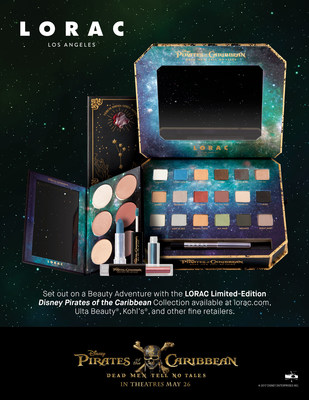 «Developing a line for Pirates of the Caribbean allows us to further cement LORAC’s Hollywood roots in a unique way. As part of the brand’s modernization, we are embracing our LA heritage with fresh and fun new product collections and this collaboration is the perfect opportunity to showcase our brand values and creativity,» Besty Hamlett, Chief Creative Officer of LORAC.

From the film-inspired shade names to the celestial designs, LORAC fans are encouraged to set out on a beauty adventure of their own and discover the hidden treasures that lie within. These collectible, limited-edition items will help fans decode beauty mysteries as they venture out on a journey full of uncharted brilliance.

The MOD Crème Dual Ended Lip Colors feature brand new lip formulas for LORAC – a creamy, moderate coverage lipstick on one end and a non-tacky, moderate shine gloss on the other end that can be worn alone or combined.

Discover the LORAC Los Angeles limited-edition Pirates of the Caribbean: Dead Men Tell No Tales collection exclusively on loraccosmetics.com/pirates from April 14th-16th, and at ULTA, Kohl’s and other fine retailers on April 16th, while supplies last.

ABOUT THE MOVIE:
Johnny Depp returns to the big screen as the iconic, swashbuckling anti-hero Jack Sparrow in the all-new «Pirates of the Caribbean: Dead Men Tell No Tales.» The rip-roaring adventure finds down-on-his-luck Captain Jack feeling the winds of ill-fortune blowing strongly his way when deadly ghost sailors, led by the terrifying Captain Salazar (Javier Bardem), escape from the Devil’s Triangle bent on killing every pirate at sea—notably Jack. Jack’s only hope of survival lies in the legendary Trident of Poseidon, but to find it he must forge an uneasy alliance with Carina Smyth (Kaya Scodelario), a brilliant and beautiful astronomer, and Henry (Brenton Thwaites), a headstrong young sailor in the Royal Navy. At the helm of the Dying Gull, his pitifully small and shabby ship, Captain Jack seeks not only to reverse his recent spate of ill fortune, but to save his very life from the most formidable and malicious foe he has ever faced.

ABOUT LORAC Los Angeles:
LORAC Los Angeles was born more than two decades ago as the leading Hollywood beauty brand for celebrities and their makeup artists. Today we continue to honor our Red Carpet heritage by bringing you the latest Los Angeles beauty looks straight from our SoCal headquarters. Our deepest purpose as a professional artist prestige cosmetics company is to inspire self-confidence by making you feel like a star. Our team works as a family to design and bring to life color cosmetics, artistic inspiration and educational techniques inspired by Hollywood glamor and fresh L.A. style. We promise to always help you look and feel beautiful without breaking the bank.

To view the original version on PR Newswire, visit:http://www.prnewswire.com/news-releases/lorac-los-angeles-introduces-a-limited-edition-pirates-of-the-caribbean-dead-men-tell-no-tales-collection-300439748.html