Norman Pattiz Announces: Hollywood’s Legendary Creator And Producer Norman Lear Hosts New Show «All Of The Above» On PodcastOne

LOS ANGELES, April 24, 2017 /PRNewswire/ — A World War II veteran, writer, producer, director, and creator of such legendary sitcoms as All In The Family, Good Times, One Day at a Time, The Jeffersons, Maude, and many others that defined and revolutionized American television, Norman Lear brings his progressive and boundary-moving voice to the microphone with an intimate weekly podcast. Announced today by PodcastOne Founder and Executive Chairman Norman Pattiz, All of the Above with Norman Lear will take listeners on an enlightening ride of conversation, from comedy to family, current events, music, politics, social issues and more. While topics will cover any and everything you can think of, the show will always feature the unique perspectives of celebrities, politicians and everyday folk. Lear is joined each week by great friend, actor, composer and sidekick, Paul Hipp.

Early celebrity guests include Amy Poehler, Julia Louis-Dreyfus, Jerrod Carmichael and America Ferrera. Conversation topics run the span of the basketball talents of Louis-Dreyfus’ son and Veep with Julia, race in media with Carmichael, training for a triathlon with Ferrera and religion with Poehler.

The podcast will debut May 1, with new episodes available every Monday on PodcastOne.com, the PodcastOne app and iTunes. Fans can pre-subscribe now.

«Circling 95, I wanted to wait until half my life was over to launch a podcast,» said Lear. «Whatever my age, I think of myself as your peer — whatever your age. Subscribe, and see if you don’t agree.»

Pattiz said, «I have known and admired Norman for a very long time. Having his podcast on our PodcastOne network is gigantic, not to mention totally cool. From one Norman to another, ‘Welcome aboard.'» 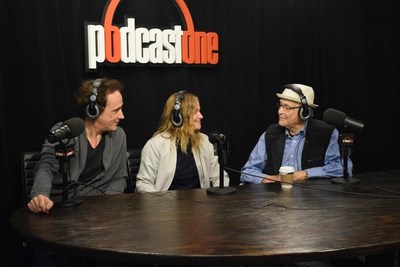 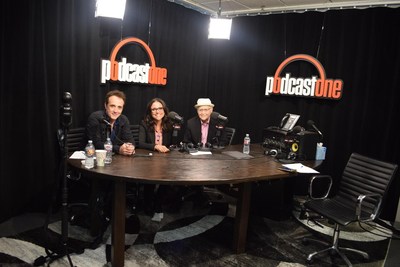 Soon to be 95, Norman Lear has lived a life of many talents. He had a front-row seat to the birth of television, writing, producing, creating or developing more than a hundred shows. He had nine on the air at the same time. Lear went beyond the screen and founded the 300,000-member liberal advocacy group People for the American Way and was presented with the National Medal of the Arts by President Clinton. Norman also purchased an original copy of the Declaration of Independence and toured it for ten years in all fifty states. Norman can be found on Facebook and Twitter @TheNormanLear.

To view the original version on PR Newswire, visit:http://www.prnewswire.com/news-releases/norman-pattiz-announces-hollywoods-legendary-creator-and-producer-norman-lear-hosts-new-show-all-of-the-above-on-podcastone-300444444.html