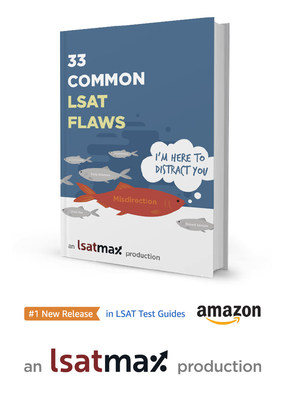 Comprehensive knowledge of flaws and logical fallacies is critical to success on the Logical Reasoning section of the LSAT test. Logical Reasoning comprises 50% of a student’s LSAT score (33.3% for students taking the at-home LSAT-Flex). Yet, to date, no other book has been published on this specific topic.

The authors of the book have identified 33 distinct logical fallacies that appear on the LSAT and distilled them into 12 Flaw Families. The book serves as a simple, thorough, and highly effective guide to achieving a better Logical Reasoning score on the LSAT. It includes:

Thorough explanations for each sample Logical Reasoning question have been written by LSATMax’s 99th percentile instructors. For each question, students learn to identify the question type, discern whether the stimulus is an argument or set of facts, and determine whether the argument is valid or flawed. Along with each sample question, the book provides a summary of the stimulus, a strategy overview, an anticipation of the correct answer, an explanation of the correct and incorrect answer choices, and a key takeaway that students can apply to future Logical Reasoning questions.

On the creation of the book, Harvard-education attorney and TestMax CEO Mehran Ebadolahi stated, «I struggled with the LSAT myself, and have now built a career preparing the next generation of law students to succeed on this exam. We’ve assembled the best group of LSAT instructors in the world, including Matt Shinners (180), Jelena Woehr (178) and Branden Frankel (175), and we collaborated to create a book unlike any other that prepares somebody to unlock their full potential on Logical Reasoning, which just happens to be worth 50% of the #1 factor in law school admissions.»

One of their instructors and co-authors, Branden Frankel, expounded, «My students often ask for a comprehensive list of LSAT flaws. Before this book, there was no such resource available, much less one that also teaches strategies for identifying each fallacy and understanding exactly why these arguments are flawed. Students who struggle with Error In Reasoning questions will see their Logical Reasoning scores increase dramatically after reading this book.»

LSATMax instructors have found that students struggle with Logical Reasoning on the LSAT for these three primary reasons:

In part because of these challenges, up to 40% of students must retake the LSAT at least once before applying to law schools.

Fortunately, 33 Common LSAT Flaws helps to address all three of these issues with its clear focus on understanding flawed arguments—which comprise a supermajority of all arguments in the Logical Reasoning section.

33 Common LSAT Flaws is now available for purchase on Amazon in paperback and Kindle formats.

About TestMax: TestMax is the leader in comprehensive app-based prep courses, transforming the standardized test prep industry with its BarMax, LSATMax, 1L and GREMax apps. Founded in 2010, they have since grown into the #1 remote legal test-prep platform in the United States—holding the #1 place in the Apple App Store for all three categories—LSAT, bar exam, and law school.