SAN FRANCISCO, April 26, 2017 /PRNewswire/ — Innovative music label Heard Well and TuneIn, the world’s largest audio network, have partnered for exclusive creation of Heard Well Radio, the first 24-7 radio station powered by influencers. The station, which is now live to TuneIn users in the U.S and Canada, features the best in new music, as curated by the most popular social tastemakers and their communities. 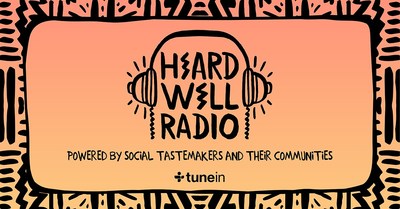 Launched in 2015 by Connor Franta, Jeremy Wineberg and Andrew Graham, Heard Well is the first of its kind music label made up of social influencers. In just two years, its creators and their social community have proven to be a dominant force in elevating awareness of artists like Odesza, Bastille, Duke Dumont and Gallant.

«Over the past two years, Heard Well has built a successful model giving emerging artists a platform to be discovered through social influencers. As we evolve as a company, our goal is to give our listeners various options to consume content,» said Heard Well Co-Founder Jeremy Wineberg. «Heard Well Radio will give us the opportunity to curate more playlists and original programming in a 24/7 platform. We will be the first to create a radio station that is exclusively powered by creators in the digital space and TuneIn is the perfect partner to build this with. With over 100M installs and Heard Well’s social reach of 10’s of millions, we’re so excited to welcome this new and exciting endeavor to our listeners!»

Heard Well Radio, exclusively on TuneIn, is the latest endeavor of a company that represents influencers with a combined social reach of nearly 70 million. The station gives that massive audience 24-7 access to the music and personalities that speak to their generation.

«I am beyond thrilled to see our record label expanding into new facets like radio and already exuding a very bright future,» said Heard Well Co-Founder Connor Franta. «It’s new. It’s ambiguous. Keep an eye out for more. This is only the beginning for Heard Well.»

Heard Well Radio will be available as part of TuneIn’s free level of service, joining TuneIn’s lineup of more than 50 exclusive curated stations available on its platform.

«The addition of Heard Well Radio to TuneIn’s lineup of curated music stations serves a dynamic demographic that is vitally important to TuneIn’s growth,» said TuneIn Chief Content Officer Kevin Straley. «We’re excited to partner with Heard Well to build this one-of-a-kind station that redefines what an immersive audio experience can be through influencer reach and social engagement.»

Heard Well Radio will feature 11 hours of live content each week, lead by signature show «Heard Well Live,» airing Monday through Friday from 6:00 – 8:00 p.m. ET. «Heard Well Live» will be hosted by Josh Fisher, who will be joined by a rotation of social tastemakers including Connor Franta and Mikey Murphy that give listeners a unique «what’s new, what’s next» audio experience with fresh music and interviews with artists like Betty Who, Aaron Carter, Starley, and San Holo.

To celebrate the launch of the station, TuneIn will host a Heard Well Radio launch party from its Venice, CA studios Friday, April 28. The party, will be broadcast live on Heard Well Radio from 9:00 – 11:00 p.m. ET, and include special performances from artists.

Other Heard Well Radio live programs in regular rotation include:

About Heard Well
Heard Well is the first music label entirely powered by social tastemakers and their communities. Heard Well partners with best in class creators to curate playlists of their favorite emerging artists. Each playlist is released in digital and physical format providing fans the ability to discover new music and enable their clients and their musicians to profit from their artistry. They are distributed worldwide through Red Distribution and to date have released over 15 albums through the Sony Music Entertainment division. Their clients trend on Billboard’s top 10 charts, place in the top 10 iTunes charts and land in top media outlets. They have exposed some of today’s top artists including Grammy nominated artists Odesza, Gallant, Anderson .Paak, Daya, Duke DuMont and Betty Who. A few of their creators include Tyler Oakley, Olympic gold medalist Gabby Douglas, The Dolan Twins, JC Caylen and many more.

About TuneIn
TuneIn is the most popular way to listen to streaming audio from around the world. With more than 60 million monthly active users, TuneIn lets people listen to the world’s sports, news, talk, and music from wherever they are. TuneIn has over 100,000 radio stations and more than 5.7 million on-demand programs stemming from every continent, and is available for free across many connected devices. TuneIn Premium lets subscribers listen to the NBA, NFL, MLB, over 40k audiobooks, and commercial-free music stations. TuneIn has venture funding from Comcast Ventures, IVP, Sequoia Capital, Google Ventures, General Catalyst Partners, and Icon Ventures, and is headquartered in San Francisco, California.

To view the original version on PR Newswire, visit:http://www.prnewswire.com/news-releases/tunein-partners-with-tastemaker-brand-heard-well-to-launch-exclusive-station-heard-well-radio-300446360.html